We Need to Make the Transition

To those who keep weather or water records or who study natural phenomenon, climate change became visible in Minnesota in the late 80s and early 90s. Gradually, more of us began to notice changes. We may have thought of it as “crazy weather,” not realizing that it signified something bigger was happening.

Luckily our state has tremendous information resources to help us make sense of these changes. And we’ve got decades of data showing the trajectory of climate change in our state. What it shows is a significant shift. If you thought our weather was variable before … well, just wait until you see what’s next.

A word of caution: It is not correct to that any particular weather event is “caused” by climate change.  It’s when we add up a pattern of unusual events over the course of years that we see the trend that is climate. Also, climate is HUGE system. In order for a small change to show up, a lot of change is happening. So with this in mind, here are the trends reported by Minnesota climatologists.

We’re Still Cold, But Not as Cold as We Used to Be

Winter isn’t going away, but it’s not going to look the same. It’s still cold, yes … the world still tilts on its axis and orbits further from the sun. That doesn’t change. But winter is tending to start later and end earlier. We’ve had rain when in years past we would have had snow. We’ve experienced unusual midwinter warming, such as the record setting heatwave of March 2012. We have cold snaps, but fewer of them. Why that matters:

We’re Still Hot and We Can Expect to Get Hotter

The Twin Cities is already a significant “heat island” (an area warmer than the areas that surround it). More heat means more strain on our energy system as the electrical grid tries to keep up with the demand for air conditioning. (Ironically, air conditioners put off a tremendous amount of heat, making outdoor conditions even worse in the metro area.) Why that matters:

We’ve Got Water. Boy, Do We Ever

Floods are already hitting Minnesota with increasing frequency, and the rain we get is different than we saw in the past. We have fewer spring showers and more torrential rainfalls. Read more about Minnesota’s water trends. Why that matters:

… and Then We Have None

Parts of our state, like the southwest, are expected to experience lengthy periods of drought.

In 2014, Harold Brooks of the National Severe Weather Lab, reported on the changing nature of storms at a Climate Adaptation Conference in Minneapolis. He said storm activity has shown great variability and it’s too soon to say if we will have more storms, but what they do know is that storm intensity goes up with the temperature. Why that matters: 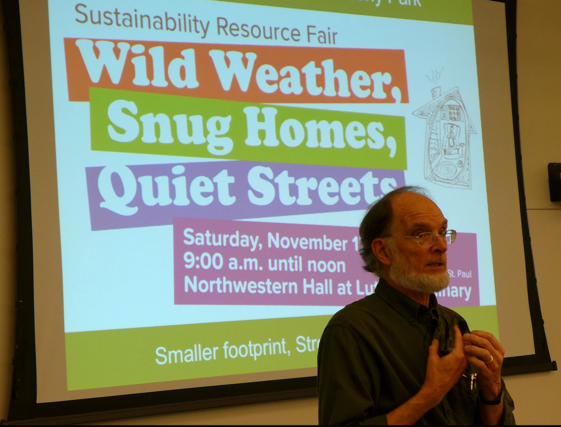 Video of the 1st of the 6-Part Climate Conversation Series

Take Action: Turn Back the Dial on Climate Change 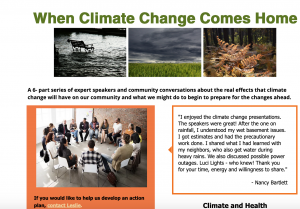 You can take immediate and direct action to reduce your carbon footprint and transition away from fossil fuels. You can join together with neighbors, coworkers, and members of your faith community to make the switch to renewable energy. You can join with local organizations like the Citizen’s Climate Lobby and MN350 to lobbying business and government to make needed changes. And you can take action to protect our planet’s natural systems so they can do their work of storing carbon.

We know our actions alone won’t be big enough to stop the changes now underway, but it may buy us time to find and implement more impactful solutions.

In the meantime, we need to help people understand the changes we are now and will soon be experiencing as we move further into climate change. Only then can we take realistic action to prepare for a future that does not look like our past.

Prepare for the Challenges Ahead

The truth is, the rate of climate change is increasing. It will impact our water, our food supply, and our health. We need to use our time and resources wisely.

We are on this journey together.